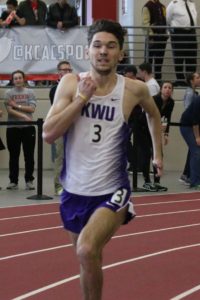 Bio:
Garrett has been running competitively for nine years, beginning as a freshman at Shawnee Mission North under the coaching of Aaron Davidson.

As a student at Kansas Wesleyan, Garrett competed in four years of Cross Country, Indoor, and Outdoor Track at the NAIA Intercollegiate Level. As a senior, Garrett was the KCAC Indoor 1,000m Champion and a National Qualifier in the 4x800m Relay in 2017.

As a post-collegiate, Garrett’s goals are to continue competing in the Middle-Distances. He’s hoping to run sub-1:56 and sub-4:00 for the 800m and 1500m, respectively.