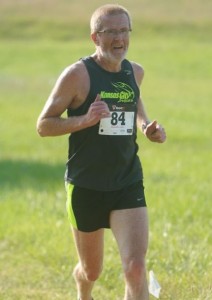 I was a golfer in high school and college and didn’t start participating in track and field until around 2001.  At that time I started training for and participating in the jumping events.  I started doing some sprinting events a couple of years later.  I started doing an occasional longer race through the years but without any distance training.  I began the shift to distance running around 2007 but was only training 10-20 miles per week and was not getting any faster.  At the continued behest of Kevin Miller, I finally started to increase my weekly mileage and got in several 50+ mile weeks in late 2011 and early 2012 before being sidelined by bilateral hernia surgery.  I got my weekly mileage back up to the 40-50 mile range later in 2012 and was able to set new lifetime pr’s in several events.  I have set a new lifetime mile pr in 2013 and look forward to setting several more pr’s this year.  I look forward to competing for the KC Smoke and enjoying competing in a team environment.