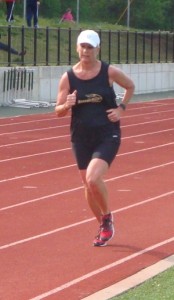 In late 2008 diagnosed with cancer, took chemo treatments for 9 months, followed by radiation during 2009.  Was able to return to training in the late fall of 2009 then set about getting qualified for the Summer Senior Games in 2010, to qualify for the National Games held in Houston Texas, which was the same site as the NAIA Championships in 1981, where I made all American.

I am hoping to continue getting stronger and improving my times as I gain more experience on the national level.