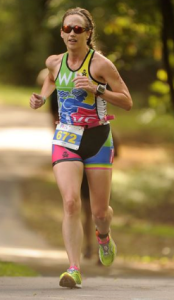 I started running in 2006 when I decided it was time to start leading a healthier lifestyle. A friend of mine talked me into doing a triathlon in 2007, and from then until about 2012 I was mainly focused on training for sprint triathlons. In 2013 I completed a half ironman, and decided it was time to focus more on running. With three young kids, I started to find it was much easier to strap on my running shoes and hit the road than it was finding time to bike or swim. The more and more I ran, the more hooked I became on the longer miles! I joined the KCTC Lee’s Summit group and found a great support group to do long training runs with. In January 2015 I ran my first marathon, and have been “hooked” ever since on improving my race times and challenging myself with longer distance racing. My biggest accomplishment thus far has been qualifying to run Boston in 2017!